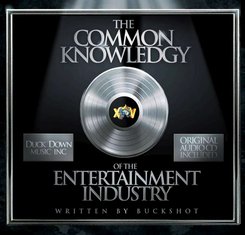 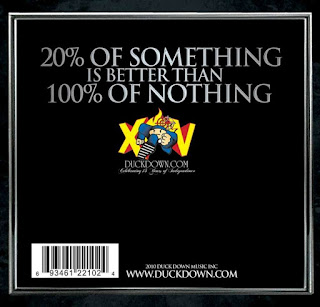 A beautiful 80 page, hard cover book that is the same size as a standard CD case. The inside, back cover includes a CD insert with original audio from Buckshot.

Buckshot is the co-founder of Duck Down Music & the lead MC for Black Moon & Boot Camp Clik.
2010 marks the 15 year anniversary of Duck Down Music. Buckshot has taken his 15 year expernce and has crafted a hard-cover pamphlet entitled 'The Common Knowledgy Of The Entertainment Industry.' The pamphlet is comprised of three stages. Buckshot first educates readers on the 'Basics' of the entertainment industry providing his definitions for terms associated within the business. Buckshot then transitions to the 'Framework,' or inner-workings of a music label and answers commonly posed questions that he receives from fans & interviewers. In the final stage, Buckshot unveils 'How It All Works,' and illustrates the process of putting the knowledge to use & executing proposed goals.
Accompanying the pamphlet is a 13-track CD album. The album features original Buckshot music based on the concepts from within the pamphlet.
Pre-order the book today & own the speciality item one month before it hits major retail on January 25th, 2011.
The book will ship December 20th, 2010.
Pre-Order here